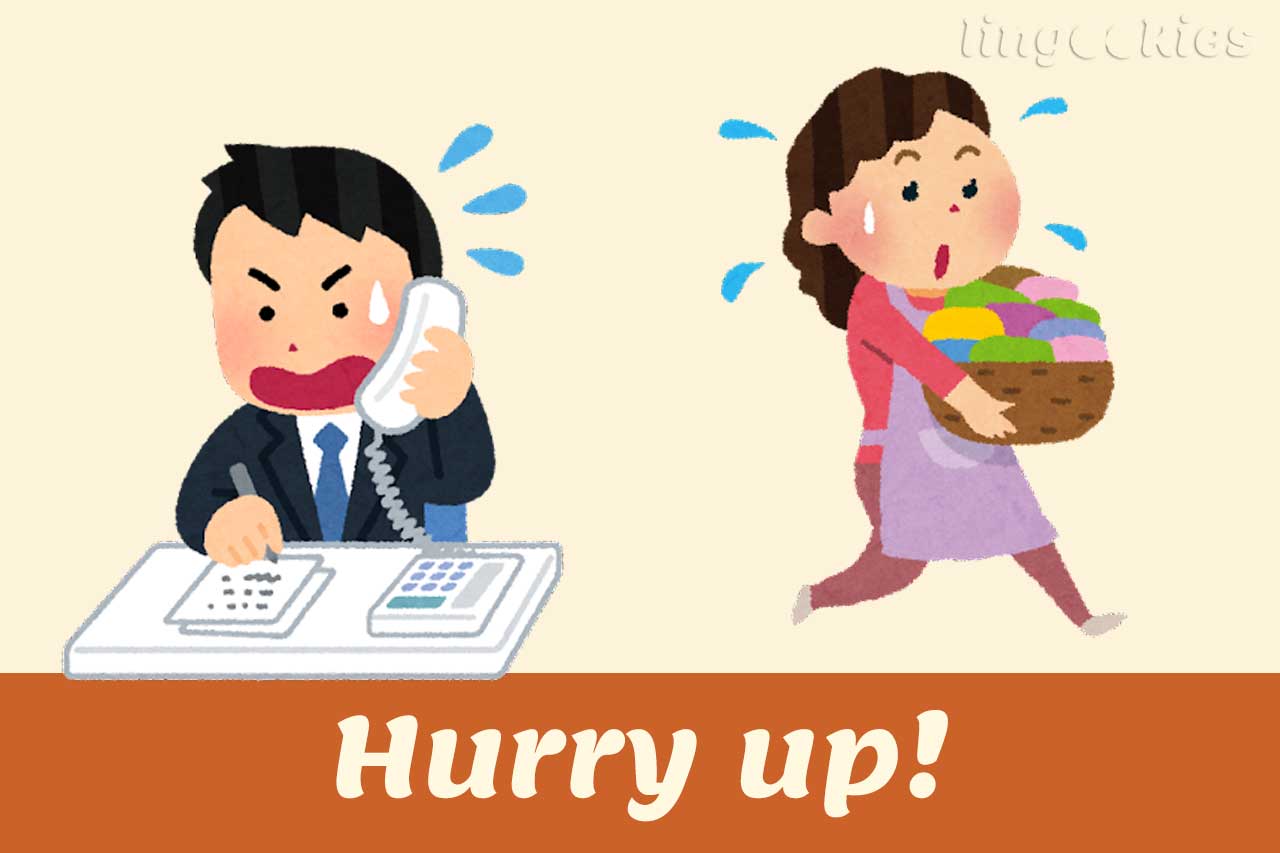 How exactly do you say hurry up in Italian?

If you need to spur a friend or relative to walk or go or work faster, there’s a number of expressions you can use in Italian. In this lesson, we will have a look at them along with their pronunciation and literal translation into English.

How do you say hurry up in Italian

Sbrigati is the most common way to say hurry up in Italian in informal settings as the reflexive verb sbrigarsi directly translates to hurry (oneself) up.

Sbrigati o farai tardi a scuola!
Hurry up or you’ll be late for school!

Si sbrighi would be the formal version of sbrigati, but in reality it’s never used because it can sound too direct and people avoid being this direct in polite settings.

If you’re really that desperate for the other person to go faster, you can sweeten the order with per piacere or per piacere, please.

This is a very informal way to say hurry up in Italian and it can be literally translated as “give yourself a move”, from mossa meaning move.

The imperative datti derives from the reflexive verb darsi, which means “to give oneself”.

Datti una mossa!
Hurry up! Get a move on!
Literally: Give yourself a move!

Devi ancora fare la doccia? Datti una mossa!
You still need to take a shower? Get a move on!

This is another way to translate hurry up in Italian and it’s suitable to use in informal contexts only.

It once again features a reflexive verb, muoversi, meaning to move oneself. So this can be literally translated as “move yourself”.

Muoviti!
Hurry up!
Literally: Move yourself!

A formal version, si muova!, also exists, but it’s almost never used and I advise you against it. Any too direct exclamation can appear rude in formal situations.

Fretta literally means haste. Fai in fretta is suitable to use in informal contexts and it can be literally translated as “do it in haste!”.

Fai is a conjugation of the verb fare, to do.

Fai in fretta!
Hurry up!
Literally: Do [it] in haste!

La mamma è in casa. Fai in fretta!
Mother is in the house. Hurry up!

Dai, su and forza are three exclamations that can be used to tell somebody to hurry up in Italian.

Dai is a conjugation of the verb dare, which we’ve seen the reflexive form in darsi una mossa, su means on and forza is a feminine noun that translates force or strength.

Dai!
Come on!
Literally: Give!

Su!
Come on!
Literally: On!

That’s it! Now you know how to pronounce all the different ways to say hurry up in Italian! Remember: even though some of these formulas can be used in formal situations, it’s always better to avoid being very direct in such settings.

If you are among friends though, and someone is taking longer than expected to do something, then feel free to spur them on with one of the Italian exclamations that you’ve just learned! 😉

Now that you’ve seen how to say hurry up in Italian, you might want to keep learning Italian online with these free Italian resources:

❤️ If you liked this lesson on how do you say hurry up in Italian, consider sharing it with your social media friends who are also studying Italian.