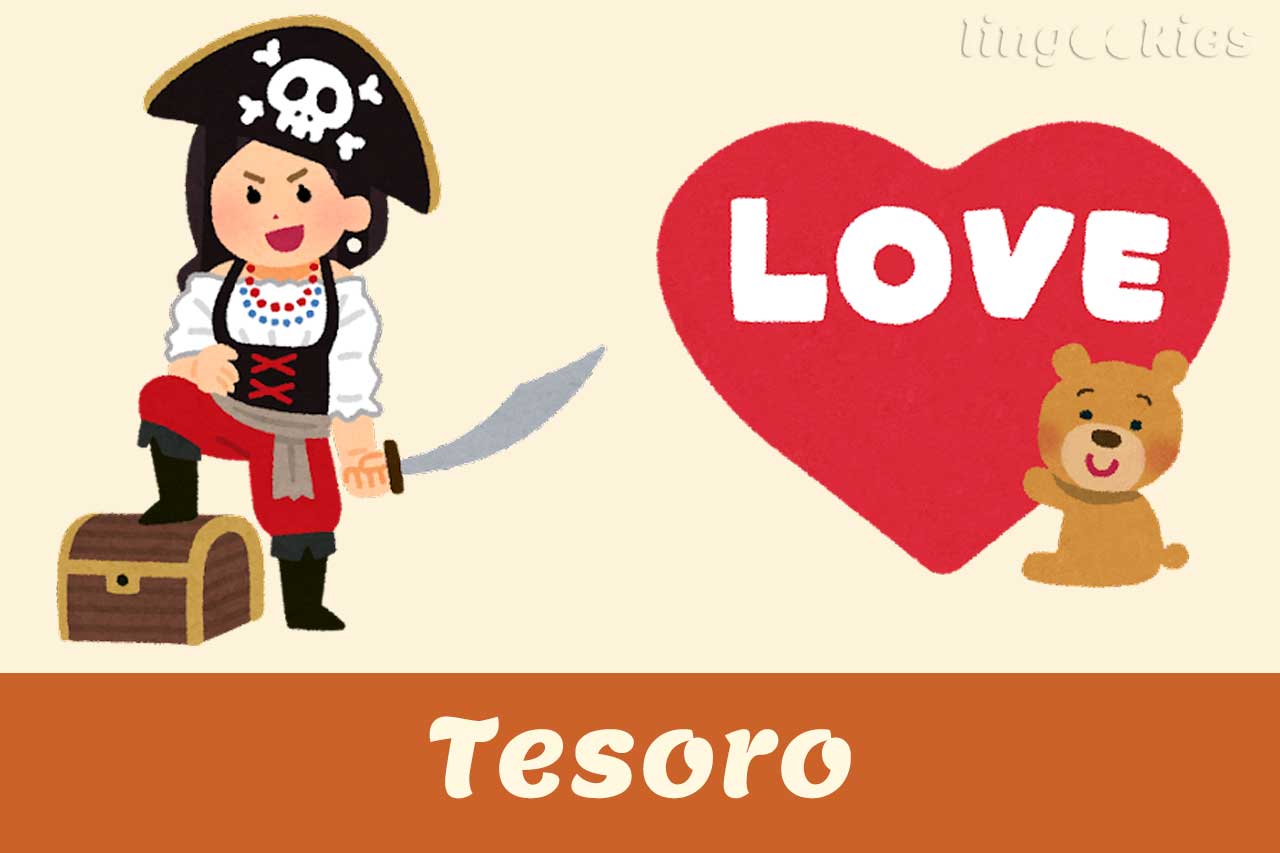 What’s the meaning of tesoro in Italian?

As you will see in this lesson, there’s more than one situation where you can use this word. We will take a look at its different meanings and hear how it is pronounced. We’ll talk about pirates, loving cuddles and Italian bureaucracy.

Tesoro is the Italian translation for treasure.

It comes from the Latin word thesaurus (yes, what you use nowadays to look up synonyms of a word!). If you want to remember what tesoro means in Italian, think about the tool you use to enrich your vocabulary.

So, how do you pronounce it?

Its pronunciation is similar to teh-soh-roh. Make sure not to add a -w sound to the final -o. Italian vowel sounds are clean.

Examples for treasure in Italian with verbs

You will find the word treasure in Italian most commonly in combination with certain verbs, such as:

Valere un tesoro
To be worth a fortune

Examples for treasure in Italian with nouns

You will find the word tesoro in Italian most commonly in combination with certain nouns, such as:

Examples for treasure in Italian with adjectives

You will find the word treasure in Italian most commonly in combination with certain adjectives, such as:

This kind of treasure doesn’t refer to a chest full of gold. Yet again, it means something very precious and valuable.

Other uses of tesoro in Italian

Tesoro in Italian has different meanings. We’ve seen the most common one, as in treasure chest. Generally speaking though, tesoro also means something or someone that is very valuable.

I miei figli sono i miei tesori.
My children are my treasures.

Not only that: tesoro is also used as a term of endearment such as sweetheart or honey. For example, an Italian mom may call his son or daughter tesoro. Children are often addressed with affectionate nicknames by their parents to stress how much they are loved and precious to them.

Tesoro, mi andresti a prendere uno scatolone vuoto in soffitta?
Honey, would you fetch me an empty box from the attic?

Grazie dell’aiuto, tesoro.
Thank you for your help, sweetheart.

When you are among friends, it is also common to thank them for their help by saying…

Grazie, sei proprio un tesoro!
Thank you, you are such a sweetheart!

Tesoro… or tesora?
There’s no female version of tesoro as an affectionate nickname, so you will say tesoro regardless of whether the recipient of the message is a boy or a girl, a man or a woman.

Treasure in Italian can also be used to mean the entire wealth of a nation.

Did you know? In the Italian translation of the Lord of the Rings trilogy (Il Signore degli Anelli), Gollum’s famous catchphrase My preciousss! has been localized as Il mio tesssoro! (my treasure!).

Idiomatic expressions with treasure in Italian

There are two idiomatic expressions featuring tesoro in Italian. One is a verb, the other one is a saying. Let’s take a look at them.

Chi trova un amico trova un tesoro
A good friend is worth his weight in gold
(He who finds a friend finds a treasure.)

Farò tesoro delle tue parole.
I shall treasure your words.

Now that we’ve covered all possible meanings of tesoro in Italian, you can put your skills to the test and start addressing your relatives and friends with it!

Now that you’ve seen how to say treasure in Italian, you might want to keep learning Italian online with these free Italian resources: