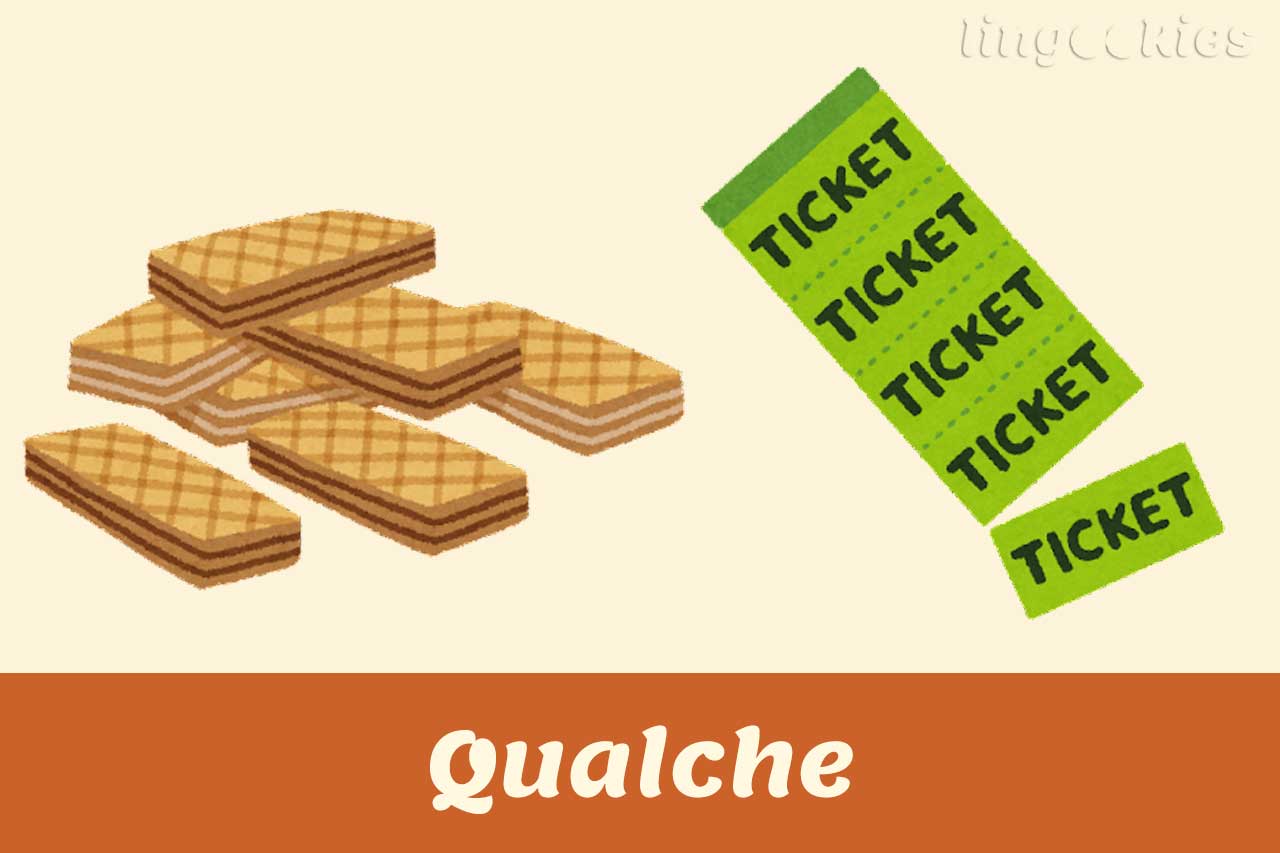 How do you use the word qualche in Italian? What does it mean? How do you pronounce it?

Qualche is an adjective that can be translated into English as “some”, “a few” or also “any”.

Qualche
Some, a few, any

Its pronunciation is close to koo-ahl-keh. If you have trouble pronouncing Italian sounds, refer to the Italian pronunciation guide.

Now, let’s see a couple of example sentences with qualche in Italian, before taking a look at how to use this word.

Nella scatola è rimasto solo qualche biscotto.
There are only a few cookies left in the box.

Hai ancora qualche moneta da due euro? Ho solo banconote da venti.
Do you still have any two-euro coins? I only have twenty-euro bills.

C’è qualche cosa che posso fare per aiutarti?
Is there anything (“any thing”) I can do to help you?

I cani stanno abbaiando. Ci dev’essere qualche animale là fuori.
The dogs are barking. There must be some animal out there.

Now let’s see what the use of qualche in Italian is.

Use of qualche in Italian

We’ve said that qualche in Italian is an adjective that can mean “some”, “a few” and also “any”. To be more precise, it’s what we call an aggettivo indefinito, an indefinite adjective. These adjectives, such as also alcuni, qualsiasi and ogni, introduce a small amount of something.

Most importantly, however, you have to remember that qualche is always followed by a singular noun, never a plural noun. It’s also used with countable nouns.

Note that almonds, a plural noun, is in the singular in Italian, mandorla (its plural would be mandorle, with a final -e). Remember: you can’t use a plural noun after qualche, even if you are talking about a plural quantity of something.

Other undefined adjectives in Italian, however, can take on a plural noun, such as alcuni/e. The same sentence with alcuni/e would be…

Alcuni changes form depending on the gender of the noun.

Qualche never changes and always stays the same, regardless of the gender of the following noun.

Qualche gatto mangia, altri gatti dormono.
Some cats are eating, some other cats are sleeping.

Now let’s take a look at some other examples (qualche altro esempio) with qualche in Italian.

C’è qualche libro che vuoi comprare?
Are there any books you want to buy?

Devo scrivere un saggio. Hai qualche foglio?
I have to write an essay. Do you have some sheets?

Vorrei qualche informazione sui vostri nuovi computer.
I’d like some information about your new computers.
(Informazione is a countable noun in Italian!)

Expressions with qualche in Italian

There are a number of common expressions featuring qualche. These are:

Qualche volta verrò a trovarti nella tua nuova casa.
Sometimes I will come to visit you in your new home.

In qualche modo ce la faremo.
Somehow we will make it.

Mio fratello è a casa da scuola perché ha qualche linea di febbre.
My brother is home from school because he has a bit of a fever.

And that’s it, now you know how to use qualche in Italian!

Now that you’ve seen how to use qualche in Italian, you might want to keep learning Italian online with these free Italian resources:

❤️ If you liked this lesson on how to use qualche in Italian, consider sharing it with your social media friends who are also studying Italian.